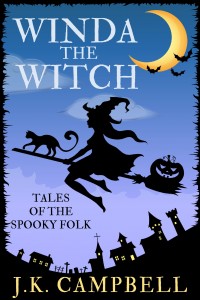 Winda The Witch: Tales of The Spooky Folk was quite a disappointment to me, because it has all the things that I love about middle grade fiction, unfortunately it’s execution leaves something to be desired.

The beginning was wonderful, we have Winda, a witch from Octoberlund who wants to visit the human world after many hours watching it through a scrying pool.  Unfortunately, on the night of Halloween when all the spooky folk visit the human world she’s grounded. Off course, this makes no difference to Winda and she sets off with her two friends, Gobbler a carved pumpkin (or Jack O’lantern as the book insist on calling it because it’s American and I’m sure they just make up nonsense words) and Weatherby the Warlock, who Winda recently turned into a cat.

See, this is what I love, spunky adventurer, loads of fantastical details about Octoberlund, mini transfiguration mishaps and sassy inanimate objects. We see a spark of this inventiveness later with a group of rouge witches. But it’s unfortunate that for a fair part of the book we wander with Winda in the human world, quite directionless. This might have been a good opportunity for Winda to have some hilarious mishap with some human invention she’s unfamiliar with, or for her to really paint a picture of Octoberlund for the fast-friend she makes, basically something spiced with the spooky essence we saw early on, instead they go to a human party. The fact of the matter is experiencing the human world is not fun, and if I wanted to do it I would go outside.

Another problem I have is that Winda, much like her book, is good at the beginning and then loses her direction half way through. She starts off full of sass and raring to go, but the human world sours her significantly, and she becomes more bossy than sassy and stops developing. She has qualities to admire, she stands up for her friends and she’s fearless. But I never really believed in her, because the internal monologue appears to have been cut; For example, she has a bad experience in the human world and wonders why she ever wanted to come, the impression I got was that it was her lifelong dream to see the humans, and her reaction was akin to the reaction I have when I find a dog hair in my coffee. I know the book is supposed to be short and snappy and that drawn out lamenting internal monologues don’t belong in it but the tone of the monologues there were, weren’t really light enough and it left things feeling a bit stunted. In short the drama was too heavy for such a cute novella.

A quick word about the writing quality, it’s pretty good, there are some very weird sentence structures but I have to wonder if that’s a regional thing because it was the same structure each time that kept throwing me.

I don’t know if I want to recommend this or not. I loved the ideas, but there’s a serious pacing problem. I would say the book’s too young for anyone as old as twelve (and fellow adults who enjoy Middle Grade Fiction), but I’d be happy to read this with my seven-year-old niece. Ultimately it’s short and fairly priced, if anything I’ve mentioned doesn’t sound like a deal breaker go for it.

I received this book in exchange for an honest review.

2 thoughts on “Book Review – Winda The Witch; Tales Of The Spooky Folk”