Let’s have a look at the book before we start:

When strange shadows and messages plague Nora’s daily life she fears for her sanity. To escape questions from her family, Nora joins her friends on a weekend getaway. Despite not liking Aidan Birket, Nora finds his remote, Victorian house charming. Until they discover the marble doorway on the third floor and, against Nora’s better judgment, they open it.

Trespassing into an unfamiliar world called the Demon’s Grave, the group face a charismatic demon and six nightmarish Challenges as punishment. Those that make it to the end can go home, but those that don’t will be his forever. Friendships are tested, secrets revealed and sacrifices will be made.

Nora battles zombies, doppelgängers, eyeless bikers, and the demon—whose interests are more than just a game of cat and mouse. If it’s all in her head, then it should be easy. But, if not, it means the demon knows about her sticky past, and the death of her twin sister.

I had a read of this one and wrote a review for it so here’s what I thought of it:

A word of advice; do not start reading this book while trying to have a bath. I made this mistake, relaxing after a long day into a bubble bath only to be completely terrified when the protagonist takes a shower, only to have a strange unseen presence in the room with her, writing messages in the condensation.

I will openly admit The Demon’s Grave was not what I was expecting. From the blurb I guessed I’d be taken on a thrilling series of Battle Royale-esque challenges, dark fantasy, thrilling maybe. That isn’t the case, but I’m certainly not going to bash a book for not being what I expected it to be, especially since it does what it was clearly intended for so well, because it is straight up, trouser-crapping, Horror.

Returning readers will know I take to Horror like a Conservative MP to the off button on a live microphone, but that’s not through a distaste for the genre, more from my own cowardice and overactive trigger-happy imagination. So take my opinion for what it’s worth (probably not enough for a bag of chocolate buttons, but here goes) but this book was scary for me, disgusting and disturbing in parts. I don’t think I’ll be alone in that opinion either, the framework for the whole book, in which the characters move through a demon dimension, lets events switch pretty quickly between a variety of sets and set pieces, so there’s something for – all the family? The fast pace (after the prologue, that part could have been edited down a bit) also keeps things moving along too fast for you to think about much, which is pretty key in a book like this, and I never found myself bored, many things, but not bored.

So the sets and events are very well done, and very good at keeping me on my toes. I would have liked to see a few more challenges in which the characters had a little more agency, a lot of the time I felt they were being railroaded, yet the horrors where they made choices leading to their problems were much more frightening. For me the horrors that occurred as a result of a character choosing not to abandon someone were much more harrowing than the spider scene which was just forced on our characters, and I’m an arachnophobic.

But let’s talk about the poor souls who are being subjected to this torture. There are two protagonists, even though we only ever see one of their perspectives, and I wasn’t sure about them at first. The intro we get before the characters are plunged into the Demon’s Grave was rather shallow, so while I knew about their day to day lives I wanted to know more about what actually made them tick.

My hesitation evaporated when things started to go south (Go? I think plunged south may be more apropos for this title) as they grew and changed with the challenges, and were actually pretty dynamic. I want to read Book Two just to hear more about Nora because her character seems to be heading to a really interesting place, but spoilers won’t let me say more than that.

That said I didn’t think much to the rest of the group, the best friend, Phoebe, gets a special brush off from me because she’s one of those Horror characters that doesn’t seem to be aware of what Horror is. You know the guys I’m talking about? The ones that always want to venture into dark and dangerous places alone, split the group up and say things like ‘I’m sure that screeching noise was nothing’. No sympathy.

One last thing from me on this title, while I’m no expert on Horror, I can tell you that if you like Horror with a twist, this may not be the book for you. This book wears Horror like an ironic trilby. The big bad is called Damien for goodness sake.

But when all is said and done this book freaked me out, so if that’s your drug, give it a read.

If this sounds like your kind of book you can find E.Mon social media here:

And E.M is giving away a £10 gift card as well, so make sure to enter in for that:

E.M. loves long walks through bookstores, Disney, horror movies/books, anything supernatural, and researching random facts. She lives by a lake out in the Canadian wilderness with internet access, her husband, and a rag-tag band of pets. “The Demon’s Grave” trilogy came out mid-2015 “Zombie-Killer Bill” novella will be re-released 2015

If you’d like to know more, please visit: http://www.emmaccallum.com 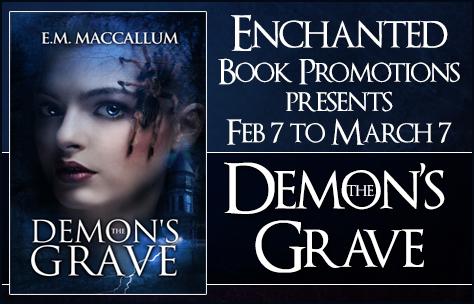