I feel like I should preface this by saying I’m a touched biased. I am a big fan of Hanako Games; I own everything they’ve ever published except ‘Science Girls’. But you should know I’m an even bigger fan of The Little Princess, so I was a bit worried about someone taking on the source material.

I’m very happy to say my worries were unfounded, while I do have some minor issues with this game the one thing it does whole heartedly is stick to its source material. That’s not to say the plot points are all the same, the routes differ and (of course) there are Yuri relationships built between the characters, – but, and this is a big but, Sara’s conviction in herself and the way she holds herself and the strength she has in the original story is all there and, to me at least, that’s what makes the book so special and now, by extension, the game.

The story is told wonderfully with Sara having many monologue scenes, using Emily (her doll) as a talking point, about her situation and the things she wants to say but can’t or shouldn’t and it paints a very real and sympathetic picture. 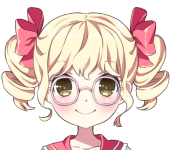 The characters around her are strong to, although I will admit there is one route I haven’t completed; Lottie, the little girl, because every time she talks I feel an overwhelming desire to fill her mouth with socks. Her aside, most of the rest of the cast are very strong and varied so there’s something for everyone, shy Ermengarde, independent Mariette, determined Jessie, even Lavinia (Sara’s rival) gets a route that I thought I would hate and then really enjoyed. I will say that I found Becky, Sara’s fellow scullery maid, a bit of a disappointment, I thought more time could have been spent showing her personality and talking about her feelings about her sad circumstances rather than the circumstances themselves. Some may argue the point that her circumstances have oppressed her so completely she hasn’t even thought to have feelings of her own. All I can say to that is maybe that’s an idea that belongs in a character study – not a romance game.

Whether I like the characters or not the writing for everyone was solid, and the relationships built well. This is another key part of the Little Princess in my opinion, the relationships the girls create and how they shift as Sara’s circumstances change and she goes from a Princess to a scullery maid. The only slight issue I had was I felt the Yuri was a bit shoe horned into some routes, Ermengarde’s route is the one that springs to mind, I didn’t even get a relationship vibe right up until the end, it kind of came out of nowhere. But on the other hand the Yuri completely made some routes, Jessie’s comes to mind, it was an amazing love story.

Moving away from the story before I gush anymore the game play.

This is the game’s biggest stumbling block. Each week you’re given a sheet to plan out what you’re going to do, for each activity you pick there’s three outcomes that give you tokens which are cashed in at the end of the week and converted to stats. Until they are cashed I the tokens can be changed by different activities, for example going for walk might change the ‘Vigour’ tokens you have into ‘Grace’ or something like that. These stats are basically currency, you use them to buy the character scenes you want to see at the weekend, the money’s taken, so the stat goes down, and you are left to build it up again next week.

That part I didn’t mind so much, it’s a bit of world building and makes the player feel like they have agency in Sara’s day to day, rather than just pointing her at the sexiest lady and going ‘mush’.

However, if you want to see as many character scenes as possible, which I’m assuming you do because it’s the entire point of the game, you’re better off save scumming. You see if you pick your activities and the random generator doesn’t give you the right tokens then you just skip the weekend and don’t get a scene that week. That’s not fun.

It gets worse later on when Sara becomes a scullery maid and you have to pick between cleaning activities and you get different stats like ‘chill’ or ‘sorrow’. You need these for scenes too, but since your route gets locked at this point you only need enough for one character, which it’s more than easy to get, you just get as many misery tokens as possible. At first I thought something bad would happen if I maxed out my hunger stat or something so I was careful, but one time the random number generator wasn’t kind to me, I maxed out a stat – nothing happened. I thought I might get an additional scene or something but no. So the player is put in the strange position where it’s beneficial to make your character as miserable as possible.

But the game play doesn’t dominate the game, the writing does and the art, the art definitely dominates, it is very pretty. As you can see.

My final point is going to be about the music, I never expect too much sound wise from VN’s which is why I was so surprised when the sound track for Little Lily kicked ass – seriously, it’s beautiful and heartfelt and just wow. Seriously if you don’t like the sound of the game buy it to listen to the soundtrack. That’s how much I like it.

So here we have another stand out from Hanako Games, despite my complaints on the game play, seriously just ignore them, the game play does not matter you have to see the rest of it.