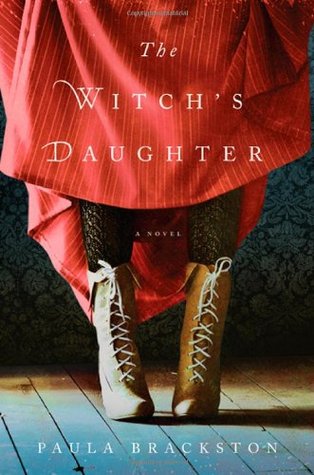 I enjoy a good bit of trashy fiction as much as the next person. I’ve been known to put down my (admittedly highly critical) reading glasses to read books from authors like Maria V.Snyder. I do truly enjoy these little trashy breaks I have because these books gear themselves entirely to wish fulfilment and to the most overly dramatic kind of romances, a guilty pleasure of mine. But The Witches Daughter confuses me, because it is neither trash fiction, as it spends too much time on poetic interludes and history, nor would I consider it to be serious fiction, as it nearly reads like a comprehensive list of the embarrassing tropes found in cheesy women’s fiction, presented with a complete lack of self-awareness.

There are four stories within this book, all about the same woman, Bess, just at different points in time; 1628, 1888, 1917 and the present day. And no, you don’t get bonus points for figuring out which historical events Bess finds herself embroiled in, for it is about as surprising water boiling in a kettle.

Despite my sarcastic candour, it can’t be denied the history was thoroughly researched. In the 1600’s especially Brackston goes into a soul crushing, but none the less enjoyable, amount of detail on the day to day of a farm dwelling. That’s to say nothing of the amount of accurate detail concerning Wiccan practices. It was this commitment to realistic setting combined with my own love of history and interest in tradition hedge-witchery that really threw me off my usual pattern for review.

You see usually when I read a book I form an opinion by the hundred page mark, occasionally this opinion will change, but mostly I find my initial impression to be sound. However, I was nearly half way through the Witches Daughter before I decided I didn’t like it very much. This is partly because, as mentioned above, I couldn’t bring myself to dislike something that was so rich in detail, but also partly because the book takes a long time to get going. Like a really long time.

But after a while I had to stop making excuses, there is no escaping the fact that this book is trash fiction, bloated beyond belief.

A lot of this is the main character, you see as the time jumps are so frequent she is the only thing we must be well and truly attached to and yet… I was speaking to a friend about Mary-Sues the other day, and how they are no less annoying if the author gives them a solitary ‘flaw’. There are three of these flaws that are very popular in Mary-Sue fiction; clumsiness, overly trusting or pushing-people-away-because-anyone-who-gets-close-to-me-gets-hurt syndrome. Bess landed on the last of these and she spends so much time soliloquizing about how lonely she is, despite the fact all we ever see her do is connect with people in the various time periods we see her in (seriously, she has a lover in every single one), that you could have probably filled a small book with those parts alone. Outside of her solitary flaw she is everything a Mary-Sue should be, long haired, beautiful, a healer, caring for others to the point of ignoring her own life, strong-willed (but not to the point it gets her into trouble) and, last but not least, absurdly powerful and immortal despite the fact she wants to be neither of these things (for some reason).

Putting Saint Bess aside we’ve got the fact that the majority of the male cast (bar the related ones) are sexually interested in her, including the main villain, Gideon, who literally chases her for centuries because she’s super powerful sexy or something, it’s never really explained. I would have thought he’d have better things to do.

There’s also the rather distasteful use of rape to advance the plot or absolve Bess of fault as the whims of the story require. I have nothing against rape in literature but I found it to be wielded with rather poor taste here.

Even if none of these things are problems for you the books writing takes a drastic downturn from the halfway point onwards. The segments in 1888 and 1917 are so clumsy I’m not 100% convinced this book was written entirely by one person as the beginning was so much smoother. The lack of explanation in the power Bess and Gideon hold becomes more painfully evident the more the book trudges on leaving things unsaid. I would have loved to understand why Bess was so averse to using her powers throughout the entire book, but the author didn’t seem to think I need to know until I was 20 pages from the end, despite the fact it was a major plot point for much of the story.

Ultimately, I simply can’t reconcile trashy themes with a long winded epic. Trashy fiction needs to be short and sweet, else the reader is going to stop and either start to question the absurdity of it all, or just get annoyed at the lack of romantic drama or dramatic fight scenes (because let’s be honest, that’s why we’re all there). Whereas a fan of a more serious fiction will wonder why everything is so absurd and why the plot is being bent over backwards to meet the needs of the characters rather than the other way around. There are two books in here that simply do not mesh, which is a shame; as if I’d experienced them both separately I probably would have recommended one of them.