I’ve called her Enid. I was going to call her Valerie (after the name of the camper in a book I wrote when I was a teenager), but then I actually drove her; the alternator is lazy, you have to hammer on the doors before they deign to open and if I accelerate over fifty this little screaming sound comes from somewhere, like the van is dying inside.

So I had to scale back the kickassery of the name. None the less I’m already attached to her, with her cute blue front and the scrape that she’s already got down the left side from me blindsiding a vegetable stand (Yes, driving’s going very well).

Why a Camper Full of Animals? Because I have literally filled it with animals; myself and these two: 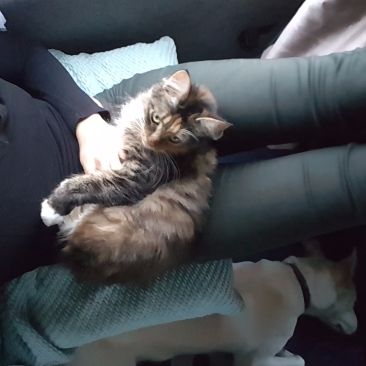 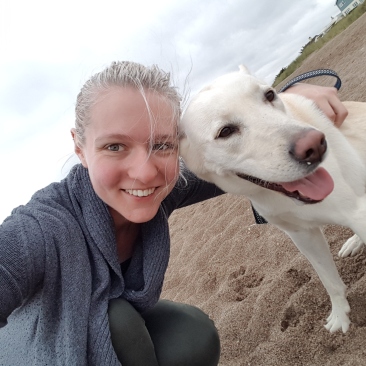 The worlds neediest dog and the worlds tiniest Maine Coon.

The idea is we’re going to nomad around the country having adventures. I have a list of things I must do (Currently counting in at 118, but I’m open to more suggestions), which I’ll kind of aim for, but for the most part, it’s all about the adventure along the way.  I’ll blog about it here, review some of the places I go, attractions, campsites, pubs etc, but for the most part this is a place for me to record my stupid stories so I can look back on them when I’m old and boring, and hopefully someone else can get a laugh out of them as well. (For those who know my website as a book blog, yes, I’m carrying on with that too, the setup for this is why there’s been radio silence for a few weeks, but book reviews are back!)

I technically started my journey about three weeks ago, but I ran into some problems (I’ll detail in an upcoming post titled something along the lines of “I’m an idiot camper noob and have no idea what I’m doing and everything is broken”, for those interested in what not to do if you’re considering this lifestyle,) but I’ve had a couple of good adventures too.

To be honest, the problems were not surprising, considering the fact I set out before I actually intended to. But I was just driving along, with the animals in Enid, mostly packed up but legitimately just heading out to get some supplies to prepare properly for my escapade. Then when I got to the camper shop I thought ‘Sod it let’s go to the beach’, so I did, singing ‘The road goes ever on and on’ to myself as I did so.

I started out in Lincolnshire, with the logic of; it’s not too far from my place so if I completely screw up and put petrol instead of diesel in the van or something equally scatterbrained, I’ll at least have an out. I’m happy to report I didn’t mess up that badly.

Had a few ‘first’ experiences while I was there, van breaking down, washing in buckets, wild camping on the beach, nearly knocking the top off my van when I forgot how tall it was; the usual, that I will also detail in a later post, covering my first weeks.

But for now, I just wanted to intro what I was doing and get the ball rolling. I’m currently in a hotel called the Swan in Alton (This backlog is just while I get used to things, soon all the info will be up to date as I go), and I thought I might head to Jane Austen’s house and have a look around this afternoon, see why I wanted to get the ball rolling? Stories already backlogging!