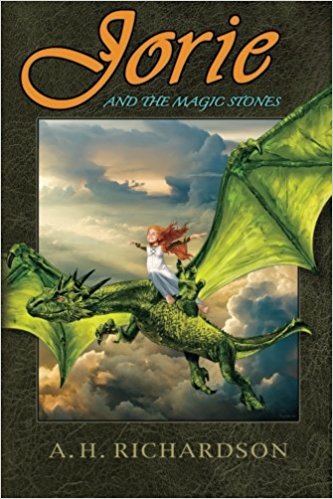 Jorie and the Magic Stones open’s with a man with black eyes, standing on a parapet looking out over two suns. Then on page two he turns into a dragon and fly’s off, so we’re off to a good start.

The beginning is just the first example of the author letting her imagination run wild, in many books there will be a few ideas, maybe a different race or two, usually there are elves in one form or another; not here. No idea is too much for Richardson, once Jorie’s steps into her magical world there are egg headed people, river folk, talking fish, poisonous butterfly’s, trolls with wings, pet dragons, I could go on but I think you get the point; very rarely do you see a book with such a free imagination.

If I had to liken it to anything it would be that old book The Magic Tree House, with a new adventure and characters ever chapter.

The writing too is not dissimilar, slightly old fashioned but quite charming at the same time, with Jorie ‘plucking up her courage’ and old wise men saying ‘come child,’ more than once.

The themes too, are classics. The overarching plot is that Jorie, and her friend Rufus, find a magical world through the tarn in her aunts back garden, and from there find Jorie is the chosen one, destined to find three magic rocks that together would make one all powerful. There’s a big bad villain with lizard legs who wants the rocks and the two children have to stop him. The friendship between Jorie and Rufus is the main focus and the bravery they show, with Jorie walking through fire and Rufus saving her from poison, among other exploits, are the high points of the story.

So we’re doing pretty well, I like classic adventures with bravery and big hateable villains, who doesn’t?

Yet, if you’re like me, simply a fan of literature for young people as opposed to someone with a child to read to I’m afraid I can’t recommend. You know there are two types of children’s books? One’s that are family friendly and one’s for children only? Well this book is really the later. The wild imagination is a little schizophrenic for an adult reader, there are five villains that are separately established but just all fall off a water fall near the end, there’s a cat who turns into a human whose character never seems to become relevant, there’s a plot about someone’s sick nephew that never gets resolved, the big bad show down with the villain is literally Jorie telling him to go away, the pacing is a bit odd and there’s zero explanation as to why these two children must go off unsupervised on a world ending mission.

You see what I mean? Reading through adult eyes I found my questioning a lot of what was going on to be getting in the way of enjoying it. Maybe I’m just a misery guts.

But, I think had I read the book when I was young I would have very much enjoyed it, the imagination is wild enough to save the book even when the pacing lags and even when I was questioning what was happening, I was still charmed by the whole affair, in the same way one is charmed by a child who tries to put the square peg in the round hole.

So if you know a kid buy it for them, if you’re not like me and you can put your adult brain in a box buy it for yourself.

1 thought on “Book Review – Jorie And The Magic Stones”