by Jenny B. Jones 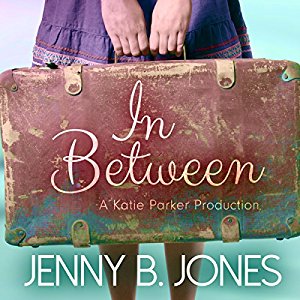 In Between; a book about a girl, Katie, spat out the foster system at warp speed towards a new family. Simultaneously afraid of staying with them and leaving for another mystery location she makes a horrible mistake and nearly ruins her chance at a better life. In Between follows Katie as she tries to make things right and settles in to her new home.

I like Katie, for several reasons. The first and most obvious being that it’s very easy to engage in a book where the main conflict (in this case Katie needing to fix the things she messed up) is caused by no one other than herself, and there is no doubt she has a journey to go on – one I was happy to follow. The second reason being it’s hard to dislike a character with so much sass, both vocalized and kept to herself, she has an individual take on everything that is both charming and empathetic.

Supporting cast are also likable, the family Katie goes to stay with are certainly good people but neither are they so good that it comes across as creepy and unreal, as they have their own flaws and quirks. Special stand out goes to Katie’s new maternal grandmother, who rides around town on a bike, point blank refusing to behave like the old woman everyone insist she is.

In Between is one of those books where I can’t point to any one section and say ‘that was thrilling’ but I cam away from it with an attachment to the characters, a desire to read the second book and a warm feeling in my chest were most humans keep their hearts.

This is also the first Christian Fiction I have read that I’ve enjoyed in a long time. God is quite omnipresent but not in such a way he eclipses anything; Katie’s new family is religious and she find’s it reasonably unsettling at first, but as the book progresses she becomes more accepting of their choices and even chats to God herself a few times while she’s at her lowest, although she remains agnostic.

I thought the whole thing added a really interesting dynamic and was a lovely way of tackling the theme of faith without being overly heavy handed.

In short In Between was a simple six hour read that will leave you feeling positive and satisfied.